Novotel Survey Reveals That Hotel Guests Are Cleaner, Greener – but Still Getting Into Trouble 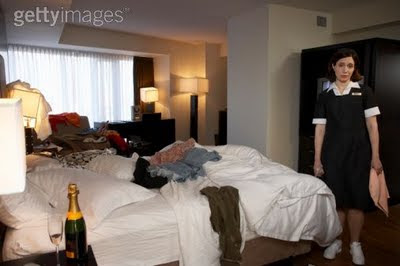 A decade after the first Novotel Survey was conducted in Australia and New Zealand, the new survey of in-hotel habits reveals that guests of both sexes are leaving their rooms cleaner and greener, but still ending up naked in corridors and leaving unusual objects behind in their rooms.

The Novotel Survey looks behind closed (hotel) doors, with housekeepers and other hotel staff reporting on the differing travel habits of men and women who stay at the group's 30 Novotel hotels and resorts in Australia, New Zealand and Fiji.

Over the past decade there have certainly been changes in guest behaviour. Both genders are traveling with fewer bags (1 bag per male to 2.1 bags per woman), guests are more likely to reuse towels, men are drinking less beer and more wine, more guests are bringing along laptops and guests are making healthier food choices.

But it seems the more things change, the more they stay the same, with women guests still messier than their male counterparts, more likely to souvenir items from their rooms and more demanding. And while the contents of minibars have changed in the past decade, the number one choice for each gender has remained the same – beer for men and chocolate for women.

While we all know women do more housework at home, it seems their good habits fly out of the window and onto the floor in hotels, with Novotel housekeepers confirming that female guests are more likely to leave their rooms in a shambles than men (69%) and are more likely to flood the bathroom (72%). Women are also more likely to 'souvenir' items from their rooms with shampoos and toiletries being the most popularly pilfered items (which are acceptable), but extending to bathrobes, hairdryers, cushions and even toilet paper (not acceptable). See breakout box below for the most audacious hotel five-finger discount.

Comparisons with the results from the 2000 Survey show that women are now more assertive than they used to be, are more likely to dine alone in hotel restaurants, to be the ones ordering the wine when in a couple and are more likely to request massages from the opposite sex than before. More women than ever are watching adult movies, now representing 12% as opposed to 8% ten years ago.

The proliferation of celebrity 'caught in the act' videos might have contributed to a big increase in the number of couples caught canoodling outside their rooms – in pools, spas, saunas, hallways, stairwells, bars and even in storeroom cupboards – and increasingly in front of very obvious security cameras. In each hotel surveyed, more guests are being 'caught out' than a decade ago and this level of exhibitionism perhaps comes from the sense of freedom and anonymity that comes with being in a hotel – but also from the increased security now in place in hotels compared with ten years ago.

The items guests forget can also be an interesting revelation into what goes on behind closed doors and while mobile phone chargers, sex toys and lingerie are popular items picked up by the housekeepers other items are more perplexing – including fake limbs, a snake, a nun's habit, false teeth, a two-metre hand-carved statue, a riding crop under the pillow and even in one case a baby! Thankfully the tot was quickly reunited with his forgetful parents.

Men, meanwhile, are more generous tippers (65%), are more likely to be caught naked outside their rooms (71%) and are more likely to order the most expensive wine on the list. Due in part, perhaps, to the global financial crisis, there was more restraint shown in tipping from both genders and the year saw an increase in guests wanting more for less from their hotel experience.

Thankfully the Survey has highlighted an increased level of care for the environment, with 32% of guests now reusing towels (and, in some cases, even bed linen not be changed). This compares with just 11% ten years ago.

Men are more likely to carry laptops than women (68%) but it is women who more often use the Novotel's MAC webcorner, which provides free internet access for guests.

Steak remains the number one choice for men (38%) but women have moved on from the previous favourite of Caesar Salad, to fish or seafood dishes (32%).

While women dining alone in hotel restaurants has increased in recent years, they are still outnumbered by their male counterparts. To encourage and make more women feel more comfortable dining alone, a special dinner package will be offered by Novotels in Australia this year that will fast-track a main meal and glass of 'Tik Tok' wine, along with magazines. In the new Novotel Christchurch, which opens later this month, solo diners will be able to take advantage of special dining 'pods' which provide a discrete fold out TV screen. It is the first such innovation to be offered in a hotel restaurant in this part of the world, though a familiar offering at Novotels in the UK and Europe.

Interesting tales from behind closed doors
Working in a hotel is never dull, with the Novotel Survey always uncovering some odd demands including the guest at Novotel Canberra who insisted the concierge arrange an appointment with the Prime Minister or the guest who said she shouldn't have to pay the extra for her ocean view room at Novotel Manly Pacific because it had rained all week so the view was obsolete. Then there was the guest who asked if he could have an Aboriginal witch doctor perform a ceremony in the lobby to help his arm grow back after he lost it in a motorbike accident and the elderly guest who demanded the executive housekeeper clip her toenails.

Other interesting requests included a guest who asked if 33 rubber ducks could be placed in the bathtub before his girlfriend checked in, the guest who wanted the bath filled with red wine at the Novotel Barossa Valley after reading about the hotel's signature spa treatment (in which a special red wine recipe is used, rather than straight wine from a bottle), and the guest who wanted his room filled with hay for his farm-loving girlfriend. And there was one guest who literally took the clothes off a staff member's back when he left his suit behind for a wedding. Thankfully the new Novotel uniforms were designed by Peter Morrissey so the guest looked suitably stylish.

Life for a hotel staffer can be dangerous too, with one hit on the head by a sex toy that had been thrown over the balcony by an angry husband and another asked to remove a 'hazardous reptile" from a guest's room – only to turn up and find a 3cm gecko above the bed.

While revealing some colourful tales about hotel life, the Novotel Survey has a serious side in uncovering trends in conferences and catering, food and beverage and guest desires and is used by management to ensure the Novotel brand stays ahead of its competitors in meeting guest needs. Some examples include the introduction of minimum organic and gluten-free items as a brand standard, the introduction of a free yoga channel and in-room yoga mat and the introduction of Novotel's Family Offer to meet the changing face of its guests. All these were reflected by behaviour in previous Novotel Surveys.

The most brazen five finger hotel discount
Shampoo, soap, even a shower cap is ok – but this is taking the five finger discount a little too far! Novotel St Kilda Rooms Division Manager, Jodie Bell, had a hunch something was amiss when she assisted a couple on check-out, heavily laden with luggage and boxes after only a 1 night stay. After lugging the goods out to the front of the hotel Jodie was surprised to find a car packed full of more bounty. A quick check of the guests room amenities, however, showed all was in order and Jodie continued with attending to other guests until a late afternoon phone call from Moorabbin Police Station. They advised they had found a large amount of goods which appeared to belong to the hotel, having pulled over the same two guests for poor driving (quite possibly because the car was out of alignment from its load!). It turns out, the guests had raided the housekeeping store rooms and trolleys and amongst the returned goods were towels, linen, hundreds of tea and coffee sachets, stationary, boxes of amenities and even a portable heater! The incident proves two things -Rooms Division Managers should go with their hunch and cheaters never prosper! 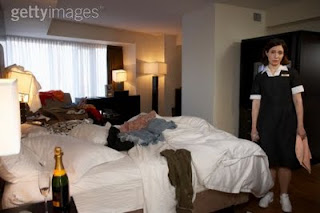